In the post-secular age, the Virgin continues to spark political fantasies. Since 1988, the founder of France’s far-right Front National party, Jean-Marie Le Pen, has held an annual gathering on May Day to honor Joan of Arc. Together with his fellow party members, the founding father of the FN marches to the statue on the Parisian Place des Pyramides to commemorate the heroic action of ‘his’ medieval pucelle – a tradition that his daughter and current party leader, Marine Le Pen, continues to embrace today. Prior to the march on May 1, 2016, a short clip was released to promote the annual rally. Over a soundtrack of increasingly dramatic music, the video assembles scenes of rampaging alien groups, assailing and invading everyday life in France: street assaults; lootings; violations by refugees and immigrants of national borders imagined to be pure and not porous; Muslims praying in a presumably secular public space. France is portrayed as being too exposed to foreign threats, yet the age of miracles is not past: the montage cuts from a dark, dusty state of anarchy to the representation of what appears to be a marvelous solution to all current political challenges. In a series of extreme close-ups, the sublime golden statue of Joan of Arc appears, portrayed as the sole beacon of hope and divine salvation. The image of the magnificent pucelle is followed by footage of a gloriously united mass marching through the streets of Paris, alternately waving the French flag and FN party banners. Le Pen’s off-screen voice booms, alluding to the defeat of the English in 1429 and Joan’s enforcement of the coronation of Charles VII at Reims – reminding us that the victorious Maid of Orleans is the hope of past, present and future generations. Analogies have been drawn on different occasions with the current political leader of the Front national1 Marine Le Pen, who was even referred to as “la Jeanne d’Arc du XXIe siècle.”2 In addition, commemorating Jeanne d’Arc’s 600th birthday in 2012, Le Pen senior closed his honoring speech by shouting “Vive Jeanne, Vive Marine, Vive la France,” blending the body politic with the sacred as well as the female body.3 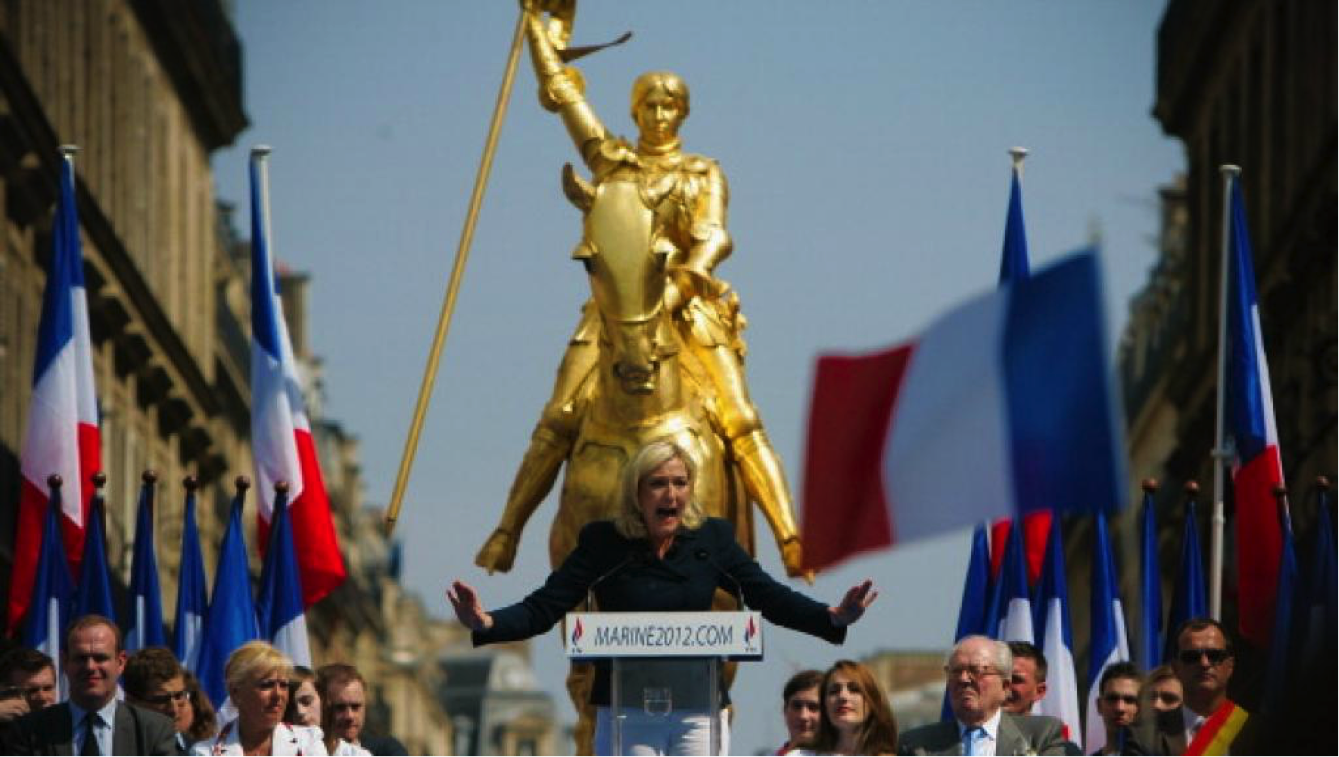 The Medieval icon is obviously being instrumentalized: by enacting this rite, the FN incites nationalist sentiment directed against all those who – according to the far-right party – betray the notion of French national identity and adhere to a global European project, as well as those who keep the borders open for immigrants and refugees, thus betraying the values that Joan of Arc supposedly fought and died for.5 As an icon, the virgin promises national unity and purity as well as “a collective experience of belonging and identity” (“eine kollektive Erfahrung der Zugehörigkeit und Identität”).6

Such figures of female virginity continue to invoke rhetorics of inclusion and exclusion, self and other, global and national. The virginal body, along with the fantasized hymen, reflects on a concrete level the fantasy of inviolable resistance, lockdown, and exclusion of the Other – practices that have always been indispensable for a sense of national belonging. Metaphors of healing the wounds that accumulate in times of political crisis are imagined in analogy with the intact virginal body. Moreover, the virgin can be understood as a figure of evidence: her body marks a biological origin, thereby underscoring questions of clear lineages, genealogies and therefore legacies. The virgin, then, stands for the genealogy of a community.

Approaching this figure that is primarily defined by its purity and sexual intactness is therefore all the more fatal. However, the virgo intacta as a divine yet simultaneously sexually charged icon implies a paradox that is fruitful for various readings: as a virgo sacra, she can serve as a metaphor for the religious and juridical category of inviolability, like the Roman Virginia, whose death produces a foundational piece of writing: The Law of the Twelve. At the same time, the virgin is defined by a (de-)sexualized body, which sparks fantasies of birth and fertility – an image that has inspired (Fine) Art, for instance with its obsession with the motif of the mater lactans, especially in Medieval Art. Last but not least, the virgo intacta is envisioned as more than a nurturing or motherly caregiver. Her sacrificial death for the rise of a nation turns passion and suffering into productive political and aesthetic categories. They can inspire scenarios for constituting community, consequently endowing them with a divine origin.

The extravagant rallies and ceremonies around Joan of Arc comprise two aspects that are intertwined and which I find particularly intriguing: the forging of affective communities and the return of the divine. These regular marches in France evoke a political sphere overshadowed by the presence of the divine. In fact, the closing of the clip with the motto „Jeanne, au secours!“ resembles a scene of invocation and calls attention to the way religious practices or categories infiltrate the public political sphere. Moreover, the scene sheds light on the alternatively fatal or productive union of affect and politics. While scholarly work has investigated how the female – and most commonly virginal – body has allegorized the republic or the nation in times of political transition or turmoil – such as Marianne in post-revolutionary France or Germania during the German revolutions of 1848-4910 – little work has focused on what I would like to refer to as the affective politics of the pristine female body, derived from the sacred origin of this figure. Although – or maybe because – virgins are often depicted as stoic, they serve as generators of affect. The act of looking at or touching a virgin can inflame the passions of the masses. While the Maid of Orleans is represented by the Front National as sublime, upright, and ascetic, an aroused, affected mass assembles and is moved to action around this divine icon. Thus, the virgin serves as a medium for the generation, arousal, and control of affect. To put it differently: political affect proves artificial, since it is dependent on figures, media, and symbols in order to arise. Virginity and defloration thus bring themes of affective rhetoric and aesthetic design into play and show how being moved is experienced not only in the rhetorical, but also physical, and consequently political sense.

What is depicted as an affective, patriotic scene, is actually rooted in the ambiguous category of enthusiasm – a term that originally described godly inspiration or poetic ecstasy and overlapped in early modern times with religious fanaticism, until Lord Shaftesbury’s A Letter Concerning Enthusiasm (1708) shifted instead to a positive meaning, a means of moral refinement.11 Even though the modern understanding of the term tends to eliminate its religious dimension and to use it in a more secularized sense, in times of precarious political change, enthusiasm infiltrates the public sphere as a sentiment that can be mild or fervent, direct or disguised, thus delineating communities and inciting national feelings.

With this brief discussion of the example from France I want to react to a phenomenon I consider characteristic of the forging of political communities nowadays – communities that seem united by sharing the same fervent affect sparked by different divine media. Symbols that have been eliminated from the political sphere – consider, for example, the attempts to ban religious rituals, practices or icons from the public sphere in the aftermath of the French revolution and the anti-revolutionary opposition to this ban – return not only in the form of the explicit practice of Muslim prayer on the streets in France but also in a more implicit way, such as the political pilgrimage to the statue of a patron saint. The call for ‘pure’ nationalism and the plea for closing the borders are inspired by religious practices, inviting us to question the notion and future of the secular state.